HomePests garlic Pests of garlic are nematodes. How to identify it and how to fight.

Pests of garlic are nematodes. How to identify it and how to fight. 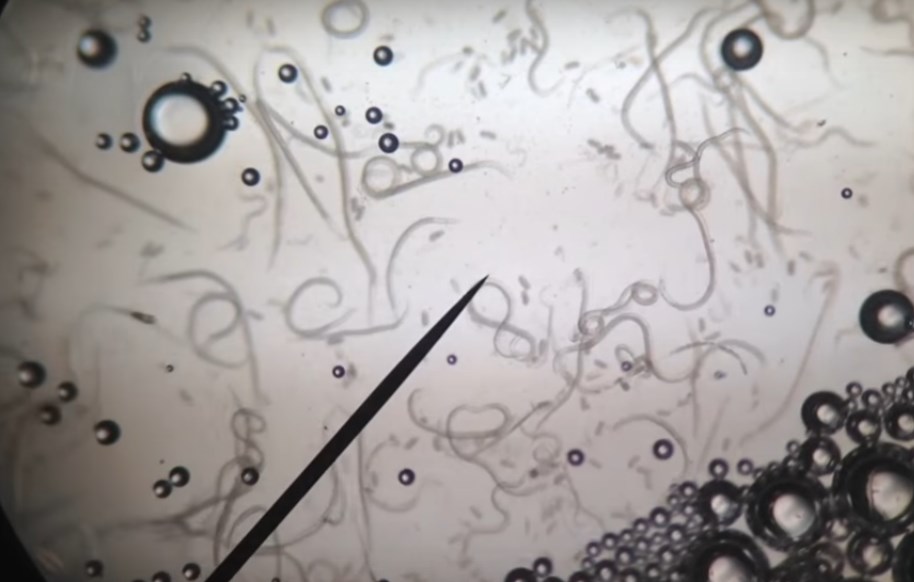 The stem nematode of onion (Ditylenchus dipsaci) belongs to the class of roundworms and causes the greatest harm in the process of vegetation, causes ditylenchus of onion and garlic.

The nematode causes primary losses of onion and garlic in the field (40-60% of the crop) and secondary losses – during storage.


Parasitize nematodes only on living tissue of plants. The nematode penetrates into the stalk and leaf pieces of garlic, including tubers and bulbs. It  almost do not damage roots.

Dimensions of the body of the nematode are very small (up to 2 mm), visible only under a microscope.

The body of nematodes is spindle-shaped, the oral cavity, the oral apparatus in the form of a sharp spear, with which the nematodes pierce plant tissues and suck out the juice, is located on the head.

The economic threshold of damage is 20 individuals per 1 kg of soil.

Picture of a nematode under a microscope: 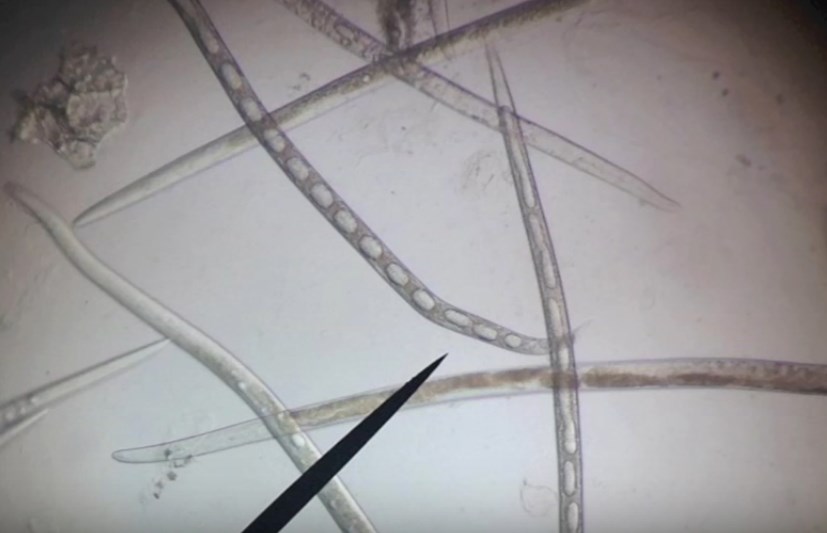 The nematode lays eggs in the tissues of infected plants. Larvae feed on plant juices, like and adult nematodes. Affected nematode plants of garlic first lag in growth, false stem thickens, often forming longitudinal bands; the leaves gradually turn yellow and then wither. The bulb becomes fragile, the bottom rots and disappear and the bulb is completely destroyed.

With the increase in the number of nematodes, the disease which became known as dithilenchosis is rapidly progressing. While the dead cells of the plant are colonized by other microorganisms and rot, the nematode larvae crawl to healthy parts of the same plant or migrate to the soil, infecting more and more new plants.

Ditylenchosis garlic can be easily identified by thickened with cracks stalks, deformed leaves and bulbs. Infected plants noticeably lag behind in growth. With a strong lesion, the cloves of the garlic become loose, loosely bound together.

During the storage of infected bulb of garlic at the base of dry flakes of teeth there is yellowing.

Another characteristic feature of ditylenchosis  is the formation of the so-called Nematode “felt” on the surface of infected bulbs during storage. “Felt” grayish color, very similar to mold. In fact, it is nothing more than tens of thousands of individuals of nematodes that crawled to the surface of a dried bulb and are at rest, waiting for more favorable conditions for further growth and development.

Also, when storing garlic contaminated with nematode, a strong odor can be felt in the vault.

Picture shoots of garlic struck by a nematode: 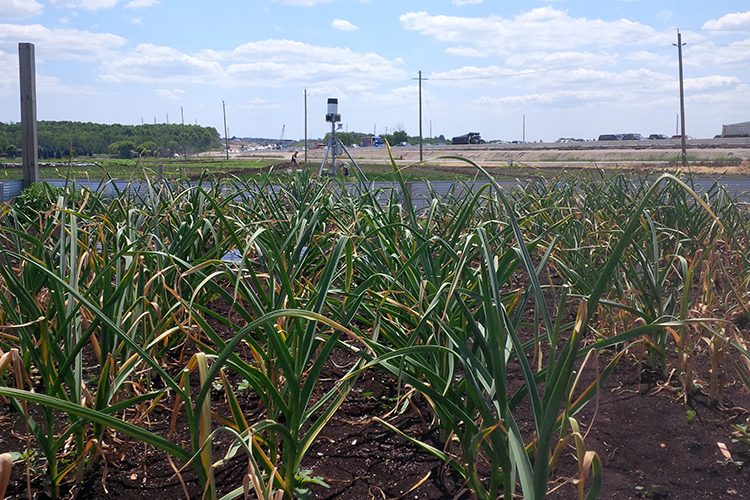 How the nematode spreads

Nematodes feed on, undergo a full cycle of development and multiply exclusively in the tissues of the host plant (onion, garlic). Therefore, the main source of infection in nature is planting material. In addition, such cultural plants as parsley, parsnip, tomatoes, potatoes, peas, oats, as well as some wild species and weeds can be places for temporary stay of nematodes.

Nematodes are spread by movement in the soil (actively) or with soil, tools and plants (passively), carried by a person from one field to another.

Life expectancy of the female is 45-75 days. Nematodes are very mobile and easily rise from a depth of up to 1.5 meters. Distance of 10 cm stem nematode onions overcomes in 3 hours.

The entire development cycle takes place in the tissues of the host plant. The total duration of the development of generation at +15 ° C is 19-23 days. During the growing season, 4-6 generations develop. They follow one another at intervals of 3-5 weeks, depending on the temperature.

Onion nematode hibernates in bulbs and dry scales or in soil. In dry, diseased bulb of garlic, nematode larvae can persist up to 4-5 years. In soil, in the absence of a host plant, up to 18 months. Getting into the wet environment, the larvae, which were at rest, are moving to active life. From the soil after sowing and planting garlic or onions they penetrate into the plant tissues through the bottom and leaves.

Reproduction of the nematode is facilitated by rainy weather and increased humidity in the vault. During storage, the nematodes crawl from diseased bulbs to healthy ones.

Video: how the nematode affects the plant

Picture of garlic bulbs which struck by nematode 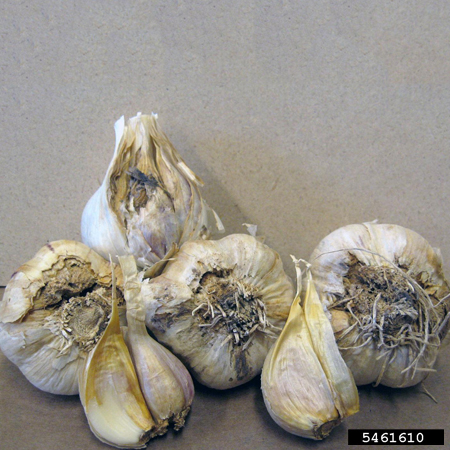 How to identify the nematode in garlic without laboratory tests (video)

In the network there was a video about how to identify the nematode in garlic with the help of a blade, water, hydrogen peroxide, flashlight and mobile phone. In short, the path of action is this:

How to identify the nematode in the soil without a laboratory

This method does not give an accurate answer to the question of the quantitative degree of infestation of the soil by the nematode, but it will help to establish the very fact of the presence of such infection. And it will be a signal that you can not plant garlic on this soil. “Most likely” is because there are a lot of nematode species and not all of them affect garlic. Well, let’s just say, if you already find some nematodes in your soil in this way, then accurately hand this soil to the laboratory for Helminthological analysis.

By the way, the method given below is a simplified method of Berman (you can Google if you need more information):

On the diagram there is an example of a funnel by the method of Berman, so that it would be possible to understand how to do this with the help of a plastic bottle.

Methods for controlling nematodes in garlic

Until recently, nematicides were used to protect against phytoparasitic nematodes. The most common in Ukraine was the insecticide-nematocide Marshal (the term of its registration expired in 2013). But in the world, scientists came to the conclusion that this practice significantly exacerbates the problem of environmental protection – nematicides are very toxic, do not decompose long in soil, and their duration is limited, and the introduction is possible only with special equipment. Unregulated use of these expensive drugs can lead to a local environmental disaster. Therefore today in many countries of the world use of the majority of known nematicides is forbidden.

What can be done to prevent and control the nematode.

No type of nematode that affects garlic, does not damage lupine, facial.

The pest is not harmed by cereals (except oats), as well as clover, alfalfa.

With the nematode, you can fight with the help of rye crops. After harvesting garlic, in September they sow rye. In the spring, rye fields are dug up and the field for this year will be ready for planting vegetable crops.

The roots of marigold and marigold (of the type Tagetes erecta, Tagetes patula – see experiments) give off substances that are deadly to nematodes.

It should be noted that some weeds serve as hosts for nematodes, so after digging the antinematode precursor, it is necessary to prevent the development of weeds on the field.

Conversely, one should not plant garlic after a predecessor, which can be affected by a nematode. As precursors of garlic, it is not recommended to grow parsley, parsnip, tomatoes, cucumbers, peas, sugar beet, buckwheat, pumpkin, zucchini, pepper, potatoes that are susceptible to stem nematodes.

To remove the nematode with the help of its predecessor, you can perform the following activities

Before sowing these crops on infected areas, it is recommended to sow huntings plants, with the help of which it is possible to reduce the number of nematodes. In garden areas, spring rape is the most commonly used as such a trapping plant. 4 weeks after sowing, the rape is pulled and burned together with the nematodes accumulated in its roots. Then the main culture is sown.

One of the effective ways to prevent the spread of the disease is the timely culling of diseased plants throughout the cycle: checking seed before planting, revealing foci of ditylenchoza directly in the field, bulkheads of the harvested crop before laying it in the vault and periodically removing the diseased bulbs during storage.

Seed material of garlic should be stored in separate bins

Nematodes die and a clove of garlic do not lose their germination.

Also, soaking in water at 43-46 ° C with formalin (40% formaldehyde solution) is used. This solution can successfully kill nematodes in the seed material within two to three hours. The working solution is prepared from the calculation of 1ml formalin per 300ml water (33ml (gram) formalin per 10 liters of water). Approximately 25-30 liters of working solution per ton of planting garlic should be prepared. Garlic in the grid is lowered into the container with the working solution until the moment of complete wetting.

After the soaking is finished, the bags are pulled out onto the grilles and covered with tarpaulin, under which they are steamed for 2-3 hours. After that the bags are hung for drying or the garlic is poured evenly onto the surface. All these measures should be carried out in an open space under a canopy (in no case indoors) while using personal protective equipment.

The degree of development of the disease has a direct impact and the state of plants. Their immune properties can be increased by feeding them. It is proved that when nitrogen fertilizers are applied in plants, the content of ammonia toxic to the stem nematode increases.

There is also information that nematodes do not like kaolin and bentonite very much. If before the crop to make these minerals into the upper layer of the soil, the nematodes will leave therefrom.

A positive effect in the fight against the nematode is the introduction before planting garlic in the soil of carbamide at a rate of 500 kg per ha.